Battlezone joins the pantheon of 1980s arcade classics at THAT! Company. 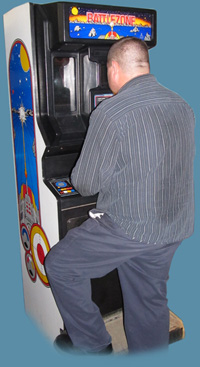 Atari released Battlezone in 1980. Its unique gameplay requires players to place their eyes into a periscope-like viewfinder to play. Windows on each side allow spectators to watch the gameplay.

The display used vector graphics, similar to asteroids, rather than raster graphics

Erupting volcanoes, a wire-frame crescent moon, geometric pyramids and rectangles dot the landscape as slow tanks ( worth 1,000 points), fast super tanks (3,000 points), guided missiles (2,000 points) and saucer-shaped UFOs (5,000 points) try to kill the player. It only takes one shot to kill an enemy.

When the game is over, the game plays Tchaikovsky’s 1812 Overture.

Ironically, Battlezone is widely considered to be the first virtual reality video game. The game was such a hit, the U.S. Army ordered modified versions to train its personnel, according to Recroom-Amusments.com

Highest Score in History: 23,000,000 points held by David Palmer, Auburn, Cali. It took Palmer 23 hours in on August 30, 1985 at The Game Room arcade in Citrus Heights, California. He quit with four tanks left. Internet Marketing Posted on February 17, 2011
ShareTweet
Listen to our CEO’s podcast “The Daily Drive” to stay driven and get great business insights from top business leaders. – Are you ready to scale your agency with a quality white label SEO, white label PPC, or white label social media provider?